One of my best friends inspired me to get into coaching because he walked with me & coached me through a pretty wild time in my life when I lost my wife of 17 years to cancer. After losing my dad in 2008 to the “C word” as well, I felt the power and healing of my community… the warmth and comfort of the people in my life who were willing to ask me the hard questions but most importantly walk with me. Really walk with me… and I believe that this is the essence of coaching. 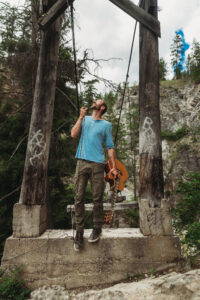 I also experienced the power of coaching & community in my journey as I got remarried and wrestled through a short, magical and painful relationship which ended in divorce.

I started my official training with the Co-Active Training Institute in 2013 but I have always had an intense desire to see people become fully alive. I really do love people and get especially fired up about seeing people move forward & beyond their “stuckness”.

In 1995 (right after high school) I moved to Holland to work with international teams & the addicts on the streets of Amsterdam. From there I started dabbling in the music industry and then spent the better part of the next 10 years in the US of A in the non-profit / church world working mainly with youth. I was writing & recording music with my band while also working at being a good husband & raising two small kids.

Along the way I have been a part of starting & building several companies including a web (Sayvee), design (Fair Trade Creative), T-shirt (Motown Rags), and most recently an audio visual company (New Horizon Productions 2012-2021).

Some of my most proud moments & accomplishments have been:

I currently live in Kelowna, BC (the Hawaii of Canada) as an empty-nester & unbelievably proud father of 2 stellar humans. I play music part-time (solo and band) where I quite often strum my guitar or tickle the ivories of my 1978 Fender Rhodes piano.

I am an Enneagram 7 and my top 2 strengths (according to Gallup) are Activator & Empathy.

Nico began his journey into coaching as a mentor for 15 years in Amsterdam, Minneapolis, Connecticut, and finally back in his hometown, Kelowna, BC, Canada. He first practiced in the non-profit & faith-based sector as a youth mentor then began formal coach training through the Co-Active Training Institute. He now provides clients with a broad knowledge and understanding of professional coaching built on a foundation of community based practice. Nico specializes in walking with clients to navigate failure, grief, loss, and also new beginnings, including how to start a business and creatively approach the achievement of goals and dreams. He is a musician, adventure seeker, and entrepreneur who has built several successful companies, raised two beautiful children, and survived the loss of his wife and father. He believes that the essence of coaching is to walk with someone fully, to help people dig deep into themselves and have the courage to take risks that bring true fulfillment.

How much am I enjoying my life outside of my regular commitments... am I exploring my hobbies and fun stuff that gives me life?

How much am I learning about myself, my behaviours, my habits, and becoming better in a meaningful way?

How sweet are my exercise routines, habits (eating / drinking etc.) and the overall shape of my physical body?

How is my connection to my partner… or if I don’t have a partner, how happy am I with my journey to finding a partner (if that's a desire)?

How is the quality, depth, and frequency of my connection to my friendships and family?

How are things going in my job and/or the direction of my work?

How content am I with how much (or little) I have in the bank?

How much peace do I have with my home life situation?

Where am I at spiritually?
Am I growing and learning?
How connected do I feel to the spiritual side of my life in general?

Congrats! You have earned 0 point(s) by completing this quiz.